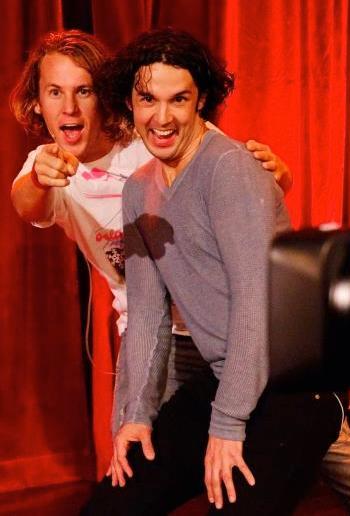 Dog goes "woof",
Cat goes "meow",
Bird goes "tweet" and mouse goes "squeek",
Cow goes "moo",
Frog goes "croak",
And the elephant goes "toot",
Ducks say "quack",
And fish go "blub",
And the seal goes "ow ow ow",
But there's one sound,
That no one knows,
What does the fox say?
"The Fox (What Does the Fox Say?)"
Advertisement:

A Norwegian music/comedy duo, consisting of brothers Bård and Vegard Ylvisåker. Internationally, they are most famous for their hit single "The Fox (What Does the Fox Say?)" which went viral on YouTube after being created for the talk show they host in Norway.

This show, I kveld med Ylvis (Tonight with Ylvis) is currently in its fourth season on the Norwegian channel TVNorge. In addition to the Ylvis brothers, the show also features comedians Magnus Devold and Calle Hellevang-Larsen. (In the second season, Calle was temporarily replaced by Swedish comedian David Batra due to conflicting obligations to his other comedy group, Raske Menn.) As well as songs and guest interviews, the show includes sketches and pranks like:

Besides I kveld med Ylvis, the Ylvisåker brothers have also hosted the program Norges herligeste (Norway's Most Wonderful), in which they visited unusual people around Norway. They also had a radio show called O-fag (in Norwegian, fag means "school subject") and did several live shows before they made it onto TV.

Ylvis has recorded several other songs in English besides "The Fox," including their ode to the American bay state "Massachusetts," the 80s rock ballad parody "Stonehenge," the romantic "Someone Like Me," and the hip-hop parody "Pressure." Additionally, many of their sketches and segments have been subtitled in English and posted on TVNorge's YouTube channel.