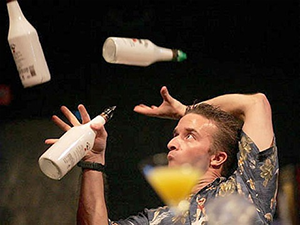 Dinner and a show.
"It don't seem natural to me, throwing up a drink before you've even swallowed it."
— Reg Deadman, Goodnight Sweetheart, "Flash, Bang, Wallop"
Advertisement:

Drink-making with an eye to showmanship, often incorporating juggling bottles and shakers, dance moves, flaming drinks, stacked glasses. Some flair bartenders make nonstandard use of bar equipment or do magic tricks with bar items. Flair bartenders may also have a sophisticated knowledge of drink mix recipes and mixing techniques. The goal is to entertain bar patrons. Possibly more prevalent in Real Life than in media; any given media portrayal has a good chance of being an homage to Cocktail. In real life, there are flair bartender competitions.

Can also be done with food, particularly ice cream.

See also Bar Slide. Likely to be an element of the Coolest Club Ever. Nothing to do with bartending performed by one of the greatest wrestlers of all time.