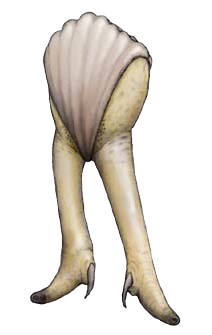 Sari Sumdac: And who designs a robot with high heels?
Flareup: I don't know, but when I find him, aarugh!
— Transformers: TransTech, "Bee in the City"

Let's say you've made a character. She's cool, she's fierce, but most importantly, she's feminine. Now what's a good way to get that across to the audience?

Maybe you make her hair long. Maybe you give her clothes. Or maybe you make her stacked like a snowfort. But what do you do if you either can't do any of that, or you have done all that and it's still not enough?

The answer: high heels. And if it makes no sense for her to be wearing them, then you can evoke them through this trope.

In its simplest form, High-Heeled Feet is Exactly What It Says on the Tin; a being whose feet are arranged in such a way that they superficially resemble high-heeled shoes. Due to its nature, this trope is often used for beings that can't be justified as traditionally wearing shoes, such as robots, aliens, or monsters.

A common example of Tertiary Sexual Characteristics. Compare High-Heel Power. Compare Robot Hair, for another visual shorthand which is often used to code non-humans as feminine. Subtrope of Clothing Appendage that often falls under Rule of Sexy and Fanservice or Fan Disservice depending on the context. Overlaps with Combat Stilettos if the character in question is a physical fighter in spite of the high-heeled feet.