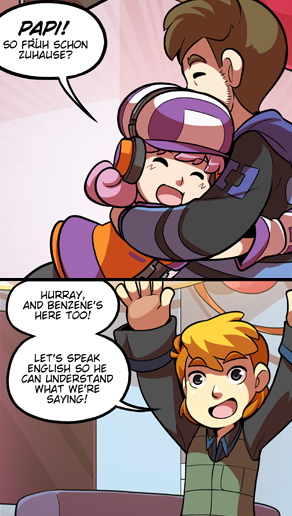 "Oh, you speak English! Good! [in German] You can turn off the subtitles now."
— German Policeman, The Man with Two Brains
Advertisement:

Characters begin speaking in a language other than the primary language of the audience, but find an excuse to switch to the more familiar language so that the audience doesn't have to read too many of those pesky subtitles.

Unlike Translation Convention or Translator Microbes, the characters who switch to English really are speaking English. Usually, a specific reason will be given in the work for characters switching to a different language in mid-conversation. There are many ways that the switch can happen.

A common reason given to justify two non-native speakers speaking English to each other is that they do so in order to "practice". Conversely, sometimes Alice and Bob might discover that they are both from an English-speaking country and don't need to speak the vernacular of where they are in when speaking to each other. Maybe Alice will suggest to switch to English because she knows it better than the current language of the conversation, or maybe they are somewhere where few people know English and they don't want to be overheard, or so on and so forth. If this is done poorly, it can be jarring and seem forced, especially if the characters really have no good reason to switch.

In addition, some non-English productions, such as Nordic cop shows, may feature this when two characters who can't speak each other's native language decide to both switch to English, which they can both speak - for example, Aliona can't speak Russian, Boris can't speak Italian, but they both can speak English; probably because they learned it at school.

Keep in mind that some examples of Translation Convention can be mistaken for this. This trope only applies if there is a reason in universe for the characters to be speaking in a language the audience can understand instead of the characters' own. This does not apply to situations where the characters speak English for the convenience of the audience, but are understood to be actually speaking another language. Also compare Completely Unnecessary Translator, which is about a character speaking to someone through a translator only to reveal that he actually speaks their language perfectly fluently.

See also Eloquent in My Native Tongue, which can be an inverse of this trope, as it may start with them speaking an unfamiliar language and switch to a more comfortable one.

At that point everyone onboard Red October speaks only in English. Tupolev's crew on board the Konovalov continue to use Translation Convention, though, and one Russian in a lifeboat lets out an exclamation in Russian. In the commentary track, director John McTiernan mentions that he recalled seeing this used in the film Judgment At Nuremberg.