Film / Until the End of the World 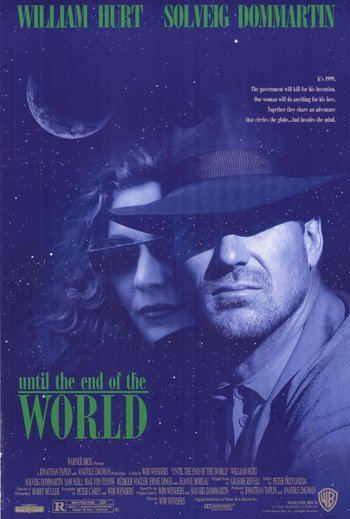 "1999 was the year the Indian nuclear satellite went out of control. No one knew where it would land. It soared above the ozone layer like a lethal bird of prey."
— Gene
Advertisement:

Until the End of the World is a 1991 film directed by Wim Wenders, starring Solveig Dommartin, William Hurt, and Max von Sydow. Intended as "the ultimate road movie", it follows the story of a runaway French party girl named Claire who gets mixed up with a couple of bank robbers and the estranged fugitive son of a brilliant scientist, and it takes place against the backdrop of an impending nuclear catastrophe, as an out-of-control satellite threatens to end civilization as we know it late in the year 1999.

Various feature-length versions of the film exist, but according to Wenders one hasn't really seen the film unless one has watched the three-part, nearly five-hour cut known as "The Trilogy". Shot on four different continents, the film saw its cast and crew expand as production moved from one location to another.

One other notable aspect of the film is its soundtrack, featuring an all-star ensemble of various artists such as Depeche Mode, Elvis Costello, R.E.M., and U2, among others. Most notably, the soundtrack includes "Sax and Violins", the final song written and released by Talking Heads prior to their breakup around the time of the film's release.

Until the End of the World: The Trilogy features the following tropes: