Film / Under the Sun of Satan 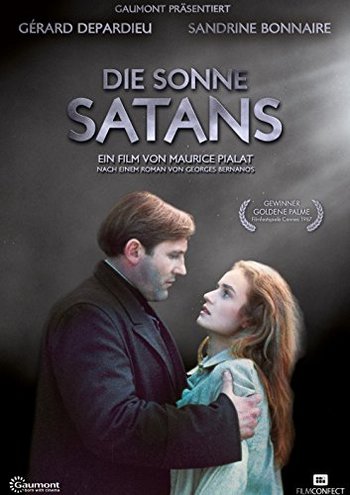 Under the Sun of Satan is a 1987 film from France directed by Maurice Pialat.

A priest, Father Donissan (Gérard Depardieu) is particularly fervent and devoted. Excessively so, in fact, as he seems to find the day to day work of a priest—confessions, absolution—uninspiring, while at the same time flagellating himself. His senior, Fr. Menou-Segrais, urges him to get his head out of the clouds but to no avail.

Meanwhile, in another town, a teenaged girl named Mouchette has seduced two different men and has gotten knocked up by one of them. She goes to the other, the local marquis, and asks him to take her away, but the marquis refuses because she's under age. So the next morning she takes his own gun and shoots him dead with it. And since no one even saw her there, she gets away with it, as the marquis' death is written off as suicide.

The two plot threads come together when Father Donissan, sent off to do some work in another town, runs into Mouchette, and dedicates himself to saving her soul.