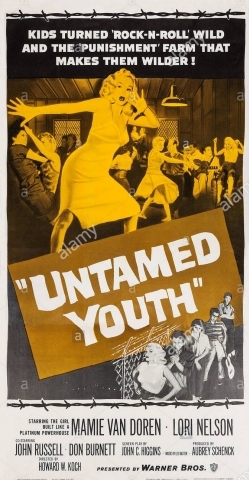 Hitchhiking sisters Penny and Jane Lowe (Van Doren and Nelson respectively) are arrested on trumped-up charges of vagrancy and sentenced to a stretch of jail time; the judge (Lurene Tuttle) offers to commute the sentence if the two agree to a work-release program, picking cotton on a nearby ranch-cum-halfway house where several other prisoners are already employed.

Said ranch is run by the local cotton magnate (Russell) like a Southern plantation, complete with all the slavery overtones; the man employs usury, extortion, and outright fraud to keep his workers permanently indentured, and even schemes to drive the other cotton farmers under by maintaining a monopoly on the local labor pool with help from the judge. Things get even more complicated when the judge's goodhearted son (Burnett) takes a job on the ranch and begins to take notice of the less-than-ideal working conditions.

Will the kids ever get out from under the cotton magnate's thumb? Will the judge oppose her own son for her own greedy ends, or will she come clean? Will Mamie Van Doren sing another song?

The film was known for being the first non-science fiction/monster film featured on Mystery Science Theater 3000; for details on that treatment, visit the episode recap page.

The film untames the following tropes: