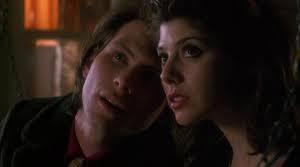 Caroline is a waitress in a small-town diner in Minnesota who has had bad luck with men. One night, when she's walking home from work, she's attacked by Howard and Patsy, two men who had been customers in the diner earlier. As Howard is about to rape her, Adam, who works as a busboy at the diner, fights them off and takes Caroline home. As she recovers, Caroline starts to fall in love with Adam. However, it turns out Adam, on top of being a little weird, has a weak heart, which he claims to be from a baboon king, thanks to a story nuns told him at the orphanage where he grew up. Will that destroy their romance?