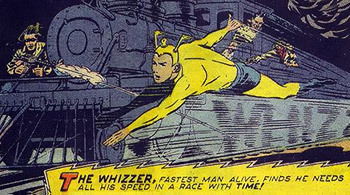 Um...you might wanna pick a better name, bro. And a different costume color.
Yellowjacket: Do you think you can stop the future? You're just a thief!
Scott: No, I'm Ant-Man.
Yellowjacket: [speechless]
Scott: I know, wasn't my idea.
— Trailer dialogue for Ant-Man
Advertisement:

All right, you've got the powers, got the costume, got the cool origin story, now you just need to pick the perfect superhero name. Maybe you go with something that describes your powers, or a grim n' gritty one-syllable name. Surely you're the next classic superhero, with an Awesome Mc Cool Name superhero name to go with it.

Wait, what's this? Why is everybody laughing? Surely evildoers would tremble at the mere utterance of your name! Or not. Sorry, pal. You need to get a better name if the Legion of Doom is going to take you as a serious threat. You've got yourself an Atrocious Alias.

Once you have committed this, there is no turning back. The name will catch on and that's how you will be known from here on. Your only hope is to become famous enough one day for everyone to not automatically think of something else when they hear it.

Many are the reasons for a character, superhero or otherwise, to have such a malodorous moniker: Maybe you were originally published in The Golden Age of Comic Books, when certain slang terms had different meanings, or the popular idea of a "cool" name wasn't exactly the same as nowadays. Maybe you're a Legacy Character, and the name wasn't of your own choosing. Maybe you're using a fairly standard Something Person naming convention and your powers don't exactly make for an intimidating name.

A specific type of Unfortunate Name. See also The Adjectival Superhero, Have a Gay Old Time (the cause for most names on this list), Giver of Lame Names. For codenames which are bad because they tried (and often failed) to be cool and/or intimidating, see Dark Age of Supernames. Contrast Awesome Mc Cool Name. For adaptations that try to stay away from those, see Comic-Book Movies Don't Use Codenames.

Not to be confused with Lazy Alias.

Please note that this trope is only about embarrassing names that the character specifically chooses. If it's a name the person was born with, see Unfortunate Names. If it's an embarrassing nickname given by those who make fun of the nicknamed character, see Embarrassing Nickname.