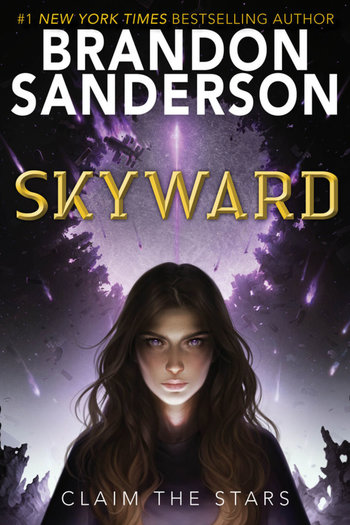 Skyward is the first book in a planned YA quartet by Brandon Sanderson. It does not take place in The Cosmere, but is in the same continuity as one of his other works.
Advertisement:

Defeated, crushed, and driven almost to extinction, the remnants of the human race are trapped on Detritus, a mysterious planet that is constantly attacked by strange alien starfighters. While most huddle in caves, the fighter pilots of the Defiant Defense Force take to the skies to protect what remains of their civilization from utter destruction.

Spensa, a teenage girl living in the caves, longs to be a pilot. When she discovers the wreckage of an ancient ship, she realizes this dream might be possible - assuming she can repair the ship, navigate flight school, and, perhaps most importantly, persuade the strange machine to help her. Because this ship, uniquely, appears to have a soul.

This series contains the following books and novellas: