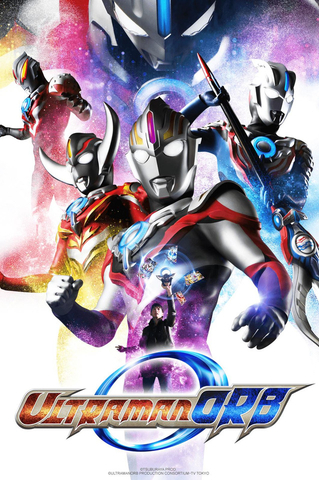 Awaken, the warrior of light.
"I am Orb! I light the darkness and strike at evil!"
— Ultraman Orb in Spacium Zeperion form
Advertisement:

Ultraman Orb is a 2016 tokusatsu series produced by Tsuburaya Productions. It serves as the 50th anniversary entry in the long-running Ultra Series. It was preceded by Ultraman X and is the first series since Ultra Galaxy Mega Monster Battle: Never Ending Odyssey not to be a part of Ultraman Retsuden. It's also the first show since Ultraman Mebius to air on Saturdays.

Since she was a small girl, Naomi Yumeno has had a recurring dream where she witnesses a battle involving a giant alien made of light. Now in the present day, Naomi runs a scrappy Paranormal Investigation blog called the Something Search People, along with plucky videographer Jetta Hayami and resident science geek Shin Matsudo.

When a group of titanic monsters known as the "King Demon Beasts" start to be roused from their slumber from deep within the Earth, Naomi is saved from their rampage by a mysterious traveller named Gai Kurenai. But Gai has a Secret Identity: he is Ultraman Orb, a warrior of light from beyond the stars who fights to protect the innocents of Earth. Having been wounded in a previous battle, Gai must call upon the powers of his Ultraman predecessors in order to transform, fusing their forms together using his Orb Ring.

Yet as Gai defeats the King Demon Beasts and collects the powers of the Ultramen who first defeated them, he is fated to clash against an old adversary named Jugglus Juggler, who is spurring the resurrection of the Beasts for his own sinister agenda.

Thanks to the efforts of director Kiyotaka Taguchi and writer Takao Nakano, Orb was plotted as a ten-part "saga" covering a number of multimedia productions, with the television series as Chapter 6. They include:

A Clip Show series titled Ultraman Orb: The Chronicle,note Not to be confused with Ultraman Orb Chronicle, a name for the 10-chapter saga aired between January and June 2018. In a similar format to Ultraman Retsuden and Ultraman Zero: The Chronicle before it, it is a series that tells the story of Ultraman Orb's adventures from the TV series to Ultra Fight Orb, with Gai himself as the navigator.

Orb's Thunder Breaster form combines the powers of the heroic Zoffy and the treacherous Ultraman Belial, granting Orb power over both light and darkness. Before he learned to control the form properly, using it turned him into a mindless berserker, as shown here.

Orb's Thunder Breaster form combines the powers of the heroic Zoffy and the treacherous Ultraman Belial, granting Orb power over both light and darkness. Before he learned to control the form properly, using it turned him into a mindless berserker, as shown here.