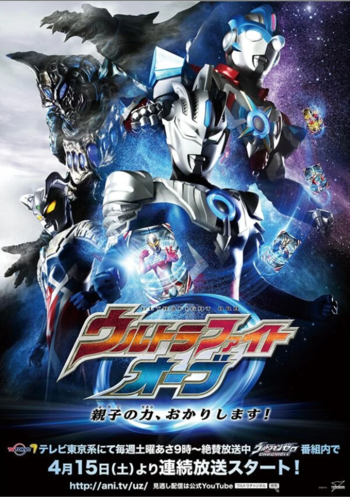 "Lend me the power of father and son!"
Advertisement:

Ultra Fight Orb is the third installment of Tsuburaya's Ultra Fight based on the Ultra Series, after Ultra Zero Fight and Ultra Fight Victory, and serves as a continuation of the adventures of Ultraman Orb after the eponymous Ultra’s series have ended.

Reibatos, a ghost mage and alien sorcerer who can manipulate the soul of any monster, seeks the forbidden weapon, the Giga Battlenizer, to rule the universe. And once again, the fate of every world in existence lies in the hands of the galaxy's protectors, the Ultra warriors...

After defeating a Demaga, Ultraman Orb, still stationed on Planet Earth, has an ominous vision that appears to be a glimpse into the future. Realizing an aura of energy emitting from the slain Demaga is travelling towards the centre of the galaxy, Orb decides to trace it, where he ends up on Planet Yomi, meeting Ultraman Zero who had also sensed the energy. It is there they discover Reibatos and his resurrected monster army, as well as the alien sorceror's sinister plans. Of course, its up to them to stop it.