Film / Ultraman Orb The Movie: Lend Me the Power of Bonds! 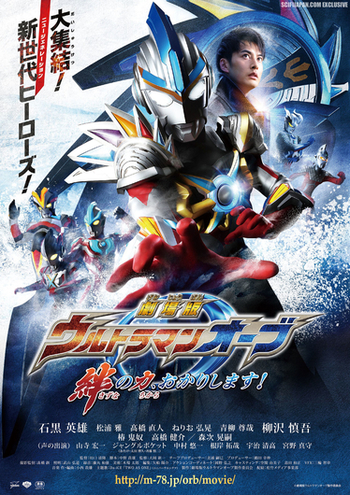 Ultraman Orb the Movie: Lend Me the Power of Bonds! is a 2017 film made by Tsuburaya Productions and directed by Kiyotaka Taguchi for the Ultra Series. It serves as the film adaptation of Ultraman Orb. The movie will be released on 11 March 2017 in celebration of the 50th anniversary of Ultraseven, in which the titular hero himself and his son Ultraman Zero appear as guest stars.

One day, a strange object appeares at the SSP's office. It is revealed to be the X Devizer, the transformation item which inhabited by Ultraman X. Having separated from his host Daichi Ozora, X seeks the help of SSP and Gai, who returned from his wandering, in search for his human host. Unknown to X, however, this brings the threat of a new enemy.

The main villain of the movie, the space sorceress Mulnau, appears in possession of the Dark Ring. With the desire to transform whatever pretty thing she fancies into something for her personal collection, she has already captured Ultraman Ginga and Ultraman Victory and starts targeting the Earth as her next destination. Things getting complicated with the return of Jugglus Juggler, Gai's Arch-Enemy, who continues his scheming ways from behind the scenes again. Thanks to Mulnau's personal alien army, X is finally captured and added to her personal collection.

Now Orb must rescue the new generation of Ultra Warriors and master the power of bonds, as the battle for Earth has begun!

Ultraman Orb The Movie provides examples of the following tropes: