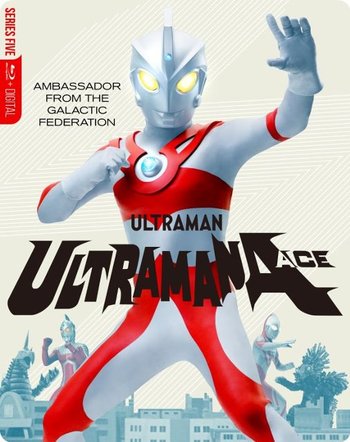 To A Distant Shining Star In The Night Sky. When Our Wishes Reach. Passing Far Beyond The Galactic Federation. He Arrives Here With Light. Now, Transform, Hokuto and Minami
Stand up and fight
Stand up and fight
Ultraman Ace
He's the ace of outer space!
Advertisement:

Ultraman Ace is tokusatsu show that aired from 1972 to 1973. It is the fifth installment in the Ultra Series.

Yapool, an interdemensional mastermind with an eternal grudge against the Ultras, seeks to take over the Earth with Terrible-Monsters (aka Choju, or 'Super Monsters'), his empowered artificial monsters, along with a handful of aliens recruited into his ranks as agents. The 5th Ultra Brother, Ultraman Ace, goes to combat him not in one, but two hosts, who he saves during Yapool's first attack against the Earth: TAC officers Seiji Hokuto and Yuko Minami. Together, Seiji and Yuko (and later just Seiji) must combat Yapool's forces and other nasties to preserve peace on Earth.