Dare to Be Badass 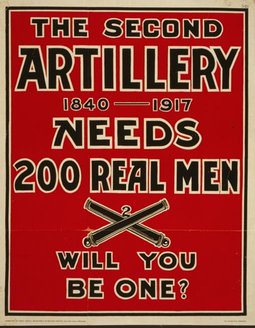 Synthetic men may instead apply to join the other regiment,

located behind the gigantic inflatable tank.

Beware of the vampires.
"You know, your father was captain of a starship for twelve minutes. He saved eight hundred lives, including your mother's — and yours. I dare you to do better."
— Captain Christopher Pike to a young James T. Kirk, Star Trek (2009)
Advertisement:

The Hero is called upon to step up to the plate and be awesome. Sounds a lot like the Call to Adventure, you say? Well yes, the two are closely related. The difference is, an Adventure Call is more like, "Hey! You totally want to take on this quest to slay the dragon and save the princess because it sure beats washing cars and sipping lattes all day (and you might even get a nice check, or even more, out of the deal)."

A Badass Dare is more like, "The Dragon has already stomped out a squadron of fighter jets and a bunch of tanks. And now he's getting ready to eat the princess. But you're our only hope. Now yeah, you can sit here and just keep sipping lattes and washing cars. Or you can take this BFG/BFS and save the world!"

The Dare to Be Badass makes the distinction that the character turning their back on the dare is somehow lesser as a person for not accepting it. Conversely, the character is being asked to step up to awesomeness because, deep down, he/she (to use the words of Captain Christopher Pike) feels like they are meant for something more. Something greater. This will usually punctuate, or trigger, massive Character Development.

While the Call to Adventure usually starts off The Hero's Journey, the Dare to Be Badass usually comes at a point when the chips are most certainly down for The Hero, and he/she must be reminded that they can't give up.

Done right, this can resemble a 30-second Rousing Speech and thus be highly awesome. Done wrong, you know what you get.

The trope name is in reference to the famous phrase of the classical philosopher Horace, sapere aude or "Dare to be wise."

Compare a "No More Holding Back" Speech. See also Consequence Combo, when the hero is being pushed into the adventure with both a carrot and a stick. Compare and contrast Go, Ye Heroes, Go and Die, which can overlap with this trope when a speech like this falls flat (or emphasizes the unpleasantness too much).

Not to be confused with a dare to be stupid.

Often reported as the words of a newspaper "Want Ad" taken out by Sir Ernest Shackleton for his ultimately ill-fated (but undeniably badass) Imperial Trans-Antarctic Expedition. Alas, there's no evidence that the ad ever ran in any known newspaper or magazine (and lots of people have looked), which is why it's in this folder and not "Advertising" or "Real Life".
Literature
Live-Action TV
Music
Mythology and Religion
Professional Wrestling
Sports
Tabletop Games
Theatre
Video Games
Webcomics
Web Original
Western Animation
Real Life
Feedback

Insulted by the insinuation that he has not considered any alternatives to the Great Rebirth, Deus tells Yasha if he is so certain that he can save the world with his own power, than he better prove it against him. Since the position of leadership isn't something that is given to a push over, beating Deus would certainly prove Yasha's point to him.

Insulted by the insinuation that he has not considered any alternatives to the Great Rebirth, Deus tells Yasha if he is so certain that he can save the world with his own power, than he better prove it against him. Since the position of leadership isn't something that is given to a push over, beating Deus would certainly prove Yasha's point to him.