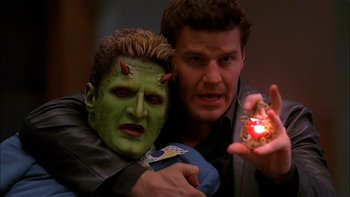 In a dark room, there is a shackled man with a bag over his head, who is being beaten with sticks by several attackers. A roaring fire blocks the doorway before him. Angel is on the other side of the fire, and jumps across. The robed attackers leave the shackled man. Angel helps the man to his feet, and takes the bag off the man's face. The man is bloody, and thanks Angel. Angel vamps out and bites the man's neck.

Nineteen hours earlier: In Angel's apartment, Angel and Nina are lying naked in bed together. It is revealed that they had sex the night before. Angel and Nina are both happy (although thankfully, Angel is not completely happy). She teasingly asks him if he was perfectly happy and if he was thinking about his "Roman friend" (which Angel evades by the excuse that he can't exactly form a thought at the moment) the whole time Nina notices that Angel is concerned with something going on at work. Angel hints that they are close to something.

In a hallway at Wolfram & Hart, Spike notices that nobody fears Illyria any more. Illyria voices her fear of weakness, since the partial loss of her powers. Illyria also mentions that Wesley will not talk to her ever since she pretended to be Fred.

As Angel and Gunn leave Angel's office, Hamilton introduces them to Senator Helen Brucker and her vampire aide, Ernesto. Ernesto is refused human blood as a beverage by Harmony. Hamilton suggests to Angel that they should make an exception this time, and Angel agrees. Gunn does not like this abrupt leniency in morals from Angel.

Wesley walks over, and informs Angel that a Boretz Demon living in a downtown amusement park has killed three people in three days, the last of which was Stacey Bluth. Wesley points out that the victims are killed violently. After receiving this news, Angel shrugs it off and leaves. Spike offers to take on the demon for Wesley. After Wesley leaves, Illyria notes that Wesley did not even notice her. Spike invites Illyria to go hunting for the Boretz demon.

In Angel's office, Angel, Gunn, Ernesto, and the Senator are watching a political ad of her rival, Mike Conley. The ad is very patriotic and Mike seems family-oriented. The Senator, afraid of losing the election to Mike Conley, wants Wolfram & Hart to brain-wash him, and make him believe that he is a pedophile. Gunn is furious at the Senator's request, but Angel agrees to help her out. The Senator tells Angel that he has just made a very loyal ally in Washington.

In Wesley's office, Wesley is researching Boretz demons. Instead of finding information, his book tells him that he is looking in the wrong place, and a strange circular symbol with eight spurs appears. Gunn walks in on the confused Wesley, whose book had just returned to normal.

At a racquetball court, Angel is sparring against Izzy, the red devil. Izzy mentions that the leader of the Fell Brethren is very happy over the sacrificial baby Angel helped the Brethren to acquire. Angel asks when will he get an answer, and Izzy tells him that it will be soon.

At a dark, abandoned amusement park, Spike and Illyria are searching for the Boretz demon. Illyria tells Spike that Angel has become corrupted, through power. Spike asks why. Illyria noticed that Angel does not notice the small battles, to which there is no gain. Angel also now ignores his close counsel. Spike disagrees about Angel being corrupt. Illyria darkly suggests that Angel will murder one of his inner circle. Drogyn the Battlebrand appears and claims Angel has already committed a murder. Illyria looks unhappy to be confronted by her previous jailer. The Boretz appears, and fights Spike, who is thrown. Illyria fights the Boretz, and kills it with a forceful kick. Drogyn says that he has come to warn Spike, but falls over. Illyria notices that Drogyn is bleeding, and Drogyn claims that it is because of Angel.

Back at Wolfram & Hart, Wesley stops at Harmony's desk and draws the strange symbol from his book. Harmony sees the symbol and says that it would look good (as a tattoo) on his calf. Ignoring her, Wesley walks into Angel's office where he finds Angel talking with Hamilton, and they ask Wesley to come back later.

Outside Angel's office, Lorne tells Wesley that Angel dropped six of his celebrity clients, without warning or asking Lorne.

Inside Wesley's office, Gunn, Lorne, and Wesley all agree that Angel is not acting like himself at all. Spike calls, and the three leave for Spike's apartment.

Gathered inside Spike's apartment, they listen to Drogyn's tale of being attacked by a Sathari Demon at the Deeper Well. Drogyn beat the Sathari, tortured it, and learned that Angel hired it to kill Drogyn. Drogyn thinks that Angel feared that he might find some incriminating evidence in the Deeper Well, and wanted Drogyn dead. This would cover-up Angel's involvement in helping Illyria's sarcophagus escape from the Deeper Well. Angel needed Illyria so that she could help him to sacrifice someone trusted and dear, such as Fred. Lorne and Gunn take the news angrily, but Spike tells them that Drogyn cannot speak lies. Wesley notes that Angel has been acting unusual lately, and Illyria assumes Angel is ready to make his move. Wesley shows them the mysterious symbol of a back circle with eight spurs on it which he found and thinks there's a connection to Angel's behavior. But none of them, including Drogyn, claim to have ever seen it before. Gunn, Lorne, Spike, and Wesley leave to confront Angel, while Illyria watches over Drogyn.

At the office, Angel is speaking with Harmony when Gunn, Lorne, Spike, and Wesley tell him they need to speak.

In Angel's office, Spike tells Angel that Drogyn's in town, after being attacked, and asks if Angel knew about the attack. Angel acts surprised at the news. Wesley asks what kind of business they're in, and Angel explains that it doesn't matter what kind of business they're in; it's all about the game, and winning. Gunn suggests that maybe Angel has turned into Angelus, and Angel points out that most of them would be dead by now if that were the case. Spike points out that Fred is dead already. Angel explains that he's lost his sense of morality, and he wants global power, through any means necessary. Lorne suggests that getting more power will just corrupt Angel further. Harmony interrupts, telling Angel about an important phone call. Wesley asks if Angel was willing to use Fred in his efforts to obtain more power, and Angel says he loved Fred, but refuses to give a straight answer.

In an interrogation room, Lorne and Wesley discuss Angel's strange actions. Wesley questions whether or not Angel was capable of hurting Fred. Then, Gunn and Spike drag a shackled Lindsey from his holding cell into the room.

Outside a building at dusk, Nina is approached by Angel. Angel gives Nina three plane tickets, and tells her to leave with her sister and niece. Nina asks why, and Angel tells her it's not safe to be near him. An angry Nina takes the tickets and promises to leave.

At Spike's apartment, Illyria and Drogyn are playing video games, when Hamilton breaks in the door. Drogyn recognizes Hamilton, before Hamilton throws Drogyn into a wall, knocking him out. Illyria fights briefly with Hamilton. But even she is not strong enough and Hamilton proceeds to viciously beat her unconscious.

In the interrogation room, Lindsey is also baffled by Angel's recent actions, but is familiar with Wesley's symbol. Lindsey tells them that the symbol represents a small, but powerful, secret society of the elite evil, called the Circle of the Black Thorn, who are actually responsible for making sure the Apocalypse goes off without any problems. Lindsey explains that Wolfram & Hart is like a well-oiled machine, with the Black Thorn running it. The Senior Partners of Wolfram & Hart actually live on a different plane of existence (presumably Hell), while on Earth, the Black Thorn runs the actives of Wolfram & Hart through powerful worldwide connections. When Lindsey returned to Los Angeles, he hoped that by killing Angel, the Black Thorn would accept him as a member. Angel's team realize that Angel has been turning evil by degrees, and Wesley thinks that there's still a chance to bring him back.

In a dark room, with the doorway is blocked by a roaring fire, there is a man shackled, with a bag over his head. He is being beaten by several robed captors. Angel jumps across the fire, and takes the bag of the man's face. It is Drogyn the Battlebrand, who thanks Angel. Angel vamps out and bites Drogyn in the neck. After drinking Drogyn's blood, Angel breaks Drogyn's neck and lets him fall to the ground.

Angel is branded with the symbol for the Circle of the Black Thorn, and all the robed attackers reveal themselves. Among them are Senator Brucker, Izzy the red devil, Archduke Sebassis, Cyvus Vail, and a few others whom Angel has never met before. The group all begin to drink champagne and celebrate Angel's acceptance into the fold.

The next day at Wolfram & Hart, Angel walks off the elevator. Angel is rubbing the spot where he was branded. Once in Angel's office, Angel is knocked to the floor and attacked by Gunn, Lorne, Spike, and Wesley, each armed with different weapons. Gunn tells Angel that they know all about the Black Thorn, and why Angel has been acting strangely. Angel attacks, and manages to disarm everybody, while only suffering a crossbow wound to the shoulder, and takes Lorne hostage. Angel pulls a crystal out of his jacket, which he activates with the Latin word involvere, in order to conceal events in the room for six minutes. During this glamor, Angel reveals that everything is a lie, and that Angel was the one who sent Wesley the message and the symbol through the demon research book. Angel also admits to sending the assassin after Drogyn. Knowing full well that Drogyn was capable of defending himself, Angel predicted exactly that Drogyn would beat the assassin and be led to believe from it that Angel had killed Fred. Once Drogyn showed up and convinced everybody that Angel had killed Fred, the Black Thorn would accept Angel as evil, and their new recruit. Angel explains further:

Two months earlier, Cordelia Chase gave Angel a one-shot vision from a single kiss. The vision involved the Black Thorn and the apocalypse.

Angel explains that after Fred was killed, he used her death to his advantage, to join the Black Thorn. Finally, Angel reveals his plan of killing all the members of the Black Thorn, and for a single moment, stopping the apocalypse, and getting the Senior Partners really angry. Angel also assumes that once the Black Thorn is eliminated, the Senior Partners won't stop until all of them are dead too. Spike grimly refers to it as a suicidal, "burn the house down, while we're still in it" strategy. Gunn, Lorne, Spike and Wesley agree to help. The episode ends with Hamilton ominously watching them from the window outside the office. Although he can only see them fighting with each other, he is still suspicious as to Angel's motives.