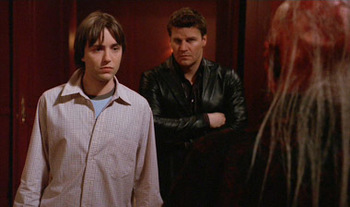 A troubled couple comes to Wolfram & Hart seeking help. The explain that their son was hit by a truck, but was completely undamaged by the experience, and they are sure that there is something supernatural going on. Angel refuses to take the case, saying that it's not their area of expertise. But as he goes down to the lobby with them, he sees their son... and it's Connor, his own son. Wesley is puzzled why Angel won't take the case—but Wesley, Fred, Gunn, and the others have no memory of Connor, since Angel had those memories removed from everyone.

Turned away, Connor and his parents go home in their car, but they are attacked by demons. Connor begins to fight them off, and is astonished at his strength. Angel arrives and rescues them, and says that he and Connor need to talk. Angel has his team investigate where the demons came from. Angel also learns from Hamilton that the Senior Partners are not behind this.

Angel and Connor go back to Wolfram & Hart, where Connor meets some of Angel's colleagues. Wesley learns that the demons that attacked Connor were working for Cyvus Vail, an incredibly powerful demon, and Vail must not have wanted it to be a secret, because he specifically sent demons that would be recognized as his—he clearly wants Connor to learn more about him. Angel pays him a visit, killing all of his demons in the meantime.

Angel is checkmated when he learns that Cyvus Vail is the one responsible for Connor's new life. He erased everyone's memories of Connor and created new ones for him so that he could live a normal life. Vail conjures a box and explains that it is an Orlon Window—through it, one who has changed reality can see things as they once were. If it is smashed, anyone in the vicinity whose memory has been altered would get their old memories back. Vail wants Connor to kill Sahjhan, a demon who Vail feels is a threat to himself. It has been prophesied that only Connor will kill Sahjhan. It was this prophecy that caused Sahjhan to bring Holtz forward it time to attempt to kill Angel, Darla, and Connor, and which results in Connor being taken from Angel and trapped in a hell dimension. But Angel, having no choice, agrees.

Wesley is shocked that Angel is even considering this, and tells him that records show that a large spell was performed by Vail the day they took over Wolfram & Hart. Angel tells Wesley it needs to be done and that Connor is special and he can do this. Connor and Angel go off to practice some fighting techniques before going to Vail's home. Connor is not very good at fighting, and stumbles awkwardly when he tries to hold some of the weapons he used to be so adept at using before. He is willing to kill Sahjhan, but seems rather naive about the realities of killing.

Meanwhile, Gunn is being tortured—he has his heart torn out every day—and Marcus Hamilton pays him a visit and offers him a deal in exchange for escaping the demon dimension. But before Hamilton can finish offering the deal, Gunn refuses and resumes the torture.

Wesley and Illyria go to the archives searching for the nature of the spell cast by Vail. Wesley realizes that reality had been changed and Illyria states that some of Fred's memories have been altered. He then finds the contract, signed by Angel, and becomes suspicious that Angel engaged in some kind of contract that caused Fred's death, just as Gunn had done, and that the reason Angel doesn't want Wesley to research this further is because he doesn't want Wesley to find out about Angel's guilt.

Connor and Angel go to Vail's to fight Sahjhan, but Vail traps Connor in a room with Sahjhan—Angel can watch the fight, but neither of the combatants can see Angel or Vail on the other side of the mystic partition, and Angel cannot interfere. Vail is deaf to Angel's pleas to let him help. The battle between Sahjhan and Connor goes poorly—Connor is not really trained in this type of combat. At that point, Wesley and Illyria show up to confront Angel. Wesley seizes the memory box from Cyvus Vail—who seems frozen in time by Illyria—and demands to know what is going on. Angel tells them he can't explain, but Wesley must trust him. Wesley accuses him of selling out Fred to her death, but Angel denies that charge and tells him he did what he did because it was for the best, and begs Wesley to not smash the box and to trust him. Wesley replies that he can't and smashes the memory box. In a split second, all of the memories of the past year related to Connor return to Wesley, including his own regrettable role in kidnapping the baby—he realizes that Angel wasn't trying to protect himself, but rather trying to protect Wesley. Angel anxiously watches Connor to see how he will react to his returned memories. Connor suddenly begins fighting back well, ultimately decapitating Sahjhan. When the mystical partition dissolves, Connor acts just like the well-adjusted suburbanite Stanford freshman he was before the battle, giving no indication that he has gotten his memories back. It appears that the mystic partition saved Connor from the effects of the Orlon Window.

They return to Wolfram & Hart, and Connor says that he is taking his parents home because this is not their world and you do what you need to do when it comes to family. As he is leaving he turns and, looking Angel in the eye, says "I learned that from my father". Connor proceeds toward the elevator and takes one last look at Angel before the doors close. Meanwhile, a humbled Wesley begins to adjust to his newly re-acquired memories of betraying Angel.