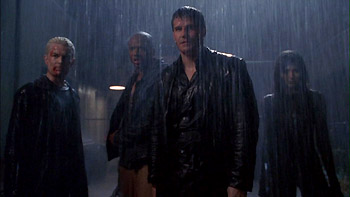 "That's all, folks."
"Though it may be too late now to sound a death knell
It's time to declare this the end of Angel.
As usual there's plenty of angst and gloom:
Just forty-two minutes 'till they meet their doom.
It may start with a scuffle, but it ends with a clang.
There's a hole in the timeslot where Cary once sang.
This is the end, the end of Angel."
For five (or more) years, his life has been hell."
— Strega, Television Without Pity
Advertisement:

The final episode of Angel picks up where the previous episode left off: Angel asks Wesley, Lorne, Gunn, and Spike if they want to wipe out the Circle of the Black Thorn. They all agree; Gunn thinks Illyria would be good to have in their corner, and Lorne mentions she's looking after Drogyn. Angel tells them to get over there right away, as Drogyn's already dead. Hamilton walks in and tells Angel that the Circle wants to see him, as they have a few...concerns about Angel's loyalties.

At Angel's meeting with the Circle, Black Thorn leader Archduke Sebassis produces the original copy of the Shanshu prophecy and asks Angel to sign it in blood. By doing so, Angel will spoil any chance of ever becoming human again—and thus prove his loyalty to the Circle. While Angel signs the prophecy, his friends find Illyria bloodied and beaten in Spike's apartment; she fingers Hamilton as her assailant. Back at Wolfram & Hart, Angel convinces old foe Lindsey MacDonald to aid in the planned attack on the Circle, then heads to Spike's apartment. Angel tells his friends to spend the rest of the day as if it were their last, because it probably will be—the attack on the Black Thorn goes down that night.

Angel meets with his son, Connor, for coffee. Connor reveals that he knows that Angel is his father; his old memories are now "mixed in" with his new ones, and he understands and appreciates what Angel did for him. Lindsey spends the day with Eve, who is suspicious of Angel even after being told he always keeps his word. Wesley tends to the wounds of Illyria, who is puzzled at why he is spending his time this way. She knows he wants to be with Fred, and offers to assume her shape, but Wesley confesses that with Fred gone, there is nothing he wants and nowhere else he'd rather be, and he would prefer that Illyria not take her form again. Gunn helps his old friend Anne, who still runs a homeless shelter in his old neighborhood. Spike spends the day at a local bar by getting drunk and...reading poetry.

After the day has passed, Angel meets with his team at Spike's apartment to go over the attack plan.

Angel says the group will divide and conquer: Angel himself will go after Archduke Sebassis, Gunn will kill Senator Brucker, Wesley will attack sorcerer Cyvus Vail, Illyria will take out Izzy the Devil and three other members of the Circle, Spike will wipe out the Fell Brethren (as well as save the human baby in their possession), and Lorne and Lindsey will team up to fight the Sahvrin Clan. Lorne has serious reservations his role in the plan; he agrees to do this "last thing" as a favor, but says he's done with the group after that.

Hamilton, forewarned by Harmony of Angel's intentions, confronts Angel at Wolfram & Hart—but Angel reveals he knew Harmony would give away the plan...and that he'd already poisoned Sebassis by spiking the demon's slave at the meeting where Angel signed the prophecy. Angel had his sights set on a one-on-one showdown with Hamilton all along; Hamilton, being an obliging sort, gives Angel what he wants. (But only after Angel fires Harmony, gives her a recommendation letter, and allows her to leave.)

Gunn, Spike, and Illyria all manage to take out their targets. Lindsey and Lorne double-team and kill the Sahvrin clan, but afterwards, Lorne—acting on Angel's orders—draws a pistol and shoots Lindsey dead. Wesley tries to kill Cyvus Vail; though he manages to hurt the demon, he is mortally wounded in the process. Illyria arrives too late to help Wesley.

Illyria: You'll be dead within moments.
Wesley: I know.
Illyria: ...would you like me to lie to you now?
Wesley: Yes...thank you, yes.

Illyria fulfills Wesley's dying request by comforting him in Fred's guise. When she turns to face the still-living Vail, he mistakes her for human and taunts her into punching him—a fatal mistake, as Illyria shatters his skull with one blow.

Back at Wolfram & Hart, Hamilton continues to beat the (un)living hell out of Angel. Connor arrives to help his father, but the duo still have trouble taking Hamilton down. Exasperated by the persistence of both father and son, Hamilton tries to boast about his power:

Hamilton: Let me say this as clearly as I can: you cannot beat me. I am a part of them—the Wolf, Ram, and Hart. Their strength flows through my veins. My blood is filled with their ancient power.
Angel: Can you pick out the one word there you probably shouldn't have said?

Angel takes a bite out of Hamilton and drinks enough blood to put the two of them on equal footing. After a brief flurry of attacks, Angel punches Hamilton hard enough to break the bastard's neck—but the Senior Partners leave no room for celebration. The entire Wolfram & Hart building shakes as Angel mentions the Senior Partners's impending counterattack. He orders Connor to go back to his family and get somewhere safe, then flees the building, not before meeting with Eve, who remains in the crumbling building after Angel coldly tells her Lindsey is not coming back.

Angel reaches the alley behind the Hyperion as rain begins to fall; Spike is already waiting for him. Gunn arrives next, heavily wounded from his fight with Brucker's vampire bodyguards. Illyria shows up moments after Gunn, left in an uncontrollable grief due to Wesley's death. When she expresses a desire to inflict more violence, the Senior Partners decide to grant her wish by unleashing an army of demons into the alleyway.

Gunn: Okay, you take the thirty thousand on the left...
Illyria: You're fading. You'll last ten minutes at best.
Gunn: Then let's make it memorable.
Spike: And in terms of a plan?
Angel: We fight.
Spike: Bit more specific?
Angel: Well, personally...
[a dragon roars as it flies overhead]
Angel: I kinda wanna slay the dragon.

The horde of demons charge at the group...

Not Fade Away contains the following tropes: