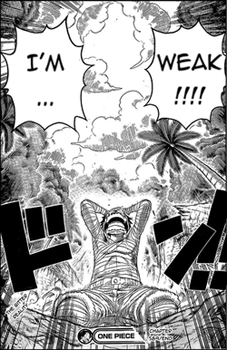 Luffy only needs two words.
"Out, out, brief candle!
Life's but a walking shadow, a poor player,
That struts and frets his hour upon the stage,
And then is heard no more."
— Macbeth, Macbeth

One of the best ways to show that a character has crossed the Despair Event Horizon is to give him/her the occasion to perform a Despair Speech to show that his/her hopes are lost and that there's nothing else left to do. Expect Creepy Monotone if the character is portrayed as scary. Manly Tears are occasionally involved.

A Despair Speech would be done by a character to show that they have crossed the Despair Event Horizon. The character is winding up his/her own lack of chances, desperation, and, sometimes, remorse for something he/she could have done or said before. If said character is a criminal, his/her confession can become a Despair Speech. Authors ought to be careful when using this: if it's done too much or badly, it becomes Wangst.