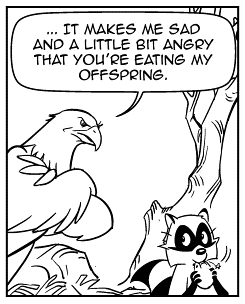 "Your lyrics lack subtlety! You can't just have your characters announce how they feel! That makes me feel angry!"
— Robot Devil, Futurama
Advertisement:

A classic rule in textwriting is to Show, Don't Tell. That includes emotions. If a character is happy, that should be obvious from his actions — not from the fact that he says "I'm happy" out loud. In general situations, people doing that in Real Life comes across as awkward and unemotional: Bob: I'm feeling really angry today!

This trope can be used for comedic effect, such as a character saying "I'm happy" with an utterly deadpan face. It can also be rather scary when the "so happy" line is delivered with barely concealed rage by a skilled actor or if The Stoic angrily says "I'm not happy". Tropes Are Not Bad, after all. And if it's a children's show that is trying to teach children how to deal with their emotions, this is certainly a better idea than hitting someone. In fact, people do often talk like this in situations where they would otherwise have trouble expressing their feelings, and how someone feels is not always as obvious as people think it is. See the Real Life section for more details.

See As You Know for the expository version of this trope. Compare And That's Terrible or Flat Joy.

Appears quite a lot in cases of Filling the Silence. Do not confuse with Is This What Anger Feels Like?, in which the perpetually jubilant character deals with anger for the first time (although that can certainly lead to this), or I'll Kill You!.