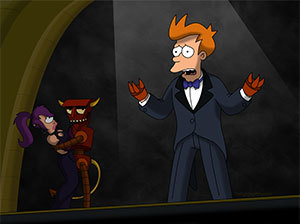 See you on some other channel

Fry continues his quest to win Leela's heart by playing the Holophonor (which he hasn't played since "Parasite's Lost"), and makes a deal with The Robot Devil to master it — only to learn that, as in every Deal with the Devil story, the ultimate price Fry must pay is something near and dear to him (in this case, it's Leela, not his soul).

It should be noted that this episode is currently the number one choice on the Futurama Best Episode Crowner.

Example of:
That Makes Me Feel Angry