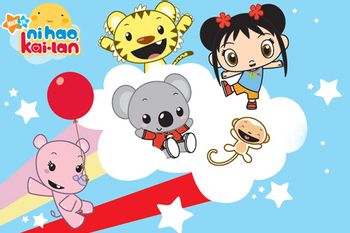 Ni Hao Kai-lan (2007-2011) is a preschool Edutainment Show that aired on Nickelodeon, adapted from a 2004 series of Nick Jr. interstitials called Downward Doghouse. The show's primary function is to teach children Mandarin Chinese. According to the show's website, it also "teaches children how to identify and cope with their feelings."

The show chronicles the adventures of Kai-lan, a young Chinese-American girl, and her various friends and family:

It basically comes off as a cute, albeit somewhat trippy kid's show.

While perhaps never formally canceled, the show ceased production in 2010. The program currently only airs in the evenings on the Nick Jr. sub-network, having apparently never quite caught the fire that Dora the Explorer did.