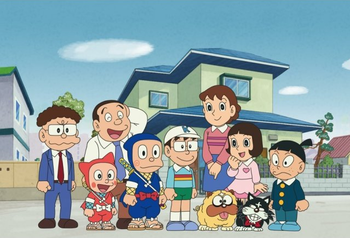 Ninja Hattorinote originally titled Ninja Hattori-kun is a series created by Fujiko Fujio A in 1964. It has received a television series, a video game, and a live-action film.

Kenichi Mitsuba is an average, lazy kid who struggles with school. His life is changed when the ninja Kanzo Hattori, his younger brother ‎Shinzō, and their ninja dog Shishimaru befriend Kenichi and become part of his family. Hattori helps Kenichi and looks out for him. Kenichi's new classmate, Kemuzou Kemumaki, is also a ninja and the series' main antagonist. Kemumaki and Kenichi are both in love with the girl Yumeko Kawai, which leads to various conflicts and disputes between them.

The animated series originally lasted from 1981 to 1987 with a total of 694 episodes and 11 special episodes. In 2006, the series was imported to India, where it became a massive hit. It was revived in 2013 as a collaboration between India and Japan and it is currently receiving new episodes. The new series is modernized and uses Adobe Flash animation. Nickelodeon India handles the dubbing and localization, including the English version.

In 2018, some seasonsnote Season 5 of the classic series (mislabeled as season 2) and seasons 1 and 2 of the 2012 series were added to Netflix in America and other Western countries.