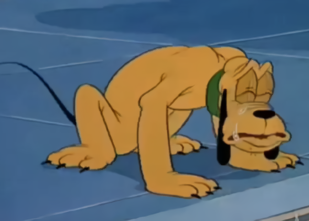 In the real world, humans are the only animals that are known to cry from emotions. Lots of other animals have tear ducts, but with the exception of humans, they only cry with tears if there is something irritating their eyes or if something is wrong with their tear ducts. In fiction, however, anyone can cry, even the animals. Sometimes, even creatures such as fish and snakes, who have no eyelids.

Usually, this is to get people to sympathize— after all, a lot of people think a character, animal or human, seems more sad if they're crying, and if they're crying Tears of Joy, then they seem more happy or happy in a more special way.

Note that this trope also does not apply to Robots or Animate Inanimate Object's, since they aren't really animals (and the trope for that may be Tears from a Stone but only if certain other things apply) nor does it apply to aliens (even if said aliens resemble Earth-like animals) since who knows what creatures on other planets can do, nor mythological creatures (like vampires, werewolves, etc) even if they resemble a real creature (such as unicorns): since they don't exist in real life so they can do whatever the writer wants without worrying about realism.

It is worth mentioning that whether animals can cry emotional tears or not is a hotly debated topic in ethology, the study of animal behaviour - many ethologists disagree with the statement that humans are the only animals who can cry.

Sub-trope of Artistic License – Biology. Compare Through a Face Full of Fur and Furry Denial for other things animals can do in fiction but not real life. See also Mouthy Bird for another trope about animals emoting in ways that they shouldn't be able to. Please note that Crying Wolf is not a subtrope of this one.

Note: If you know an animal who sheds tears, you should ask the vet about this. No animal sheds tears from sadness and something might be wrong with your animal's tear ducts.