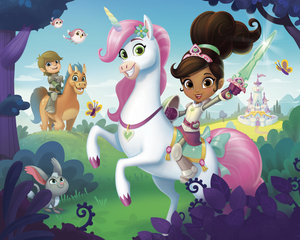 Her heart is bright, she's Nella the Princess Knight!
Advertisement:

Nella the Princess Knight is a Nickelodeon cartoon that premiered on February 6, 2017 on the Nick Jr. block, created by Christine Ricci (No, not her).

The titular character is an 8-year old biracial princess named Nella, who also transforms into a knight when someone's in trouble. She rides a unicorn named Trinket as her steed, who loves fashion. Her other friends include Sir Garrett, a young knight who carries informative trading cards everywhere, and his horse, Clod, who is the comic relief for the group. Last, but not least, especially in his mind, is Sir Blaine. A talented, if boisterous, young knight, he tends towards being competitive and self-centered, as well as being ignorant of the negative effects being such can have. Sometimes acts as an antagonistic force, sometimes not, but either way, Nella is usually able to get through to his better side, whatever the occasion, though usually not with a straightforward approach.

In January 2019, it was confirmed that the show’s second season will be its last.