Western Animation / Niko and the Sword of Light 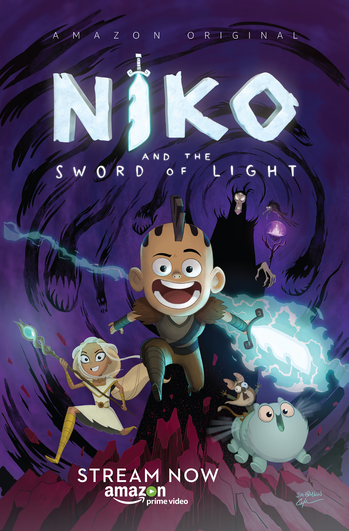 "A boy alone, lost in a savage land ruled by darkness. His people gone. His kingdom a smoldering ruin. His only hope is the Sword of Light; a magical relic, forged by the ancient gods - and the only thing powerful enough to return his land to freedom …"
Advertisement:

Niko and the Sword of Light is a 2017 series produced by Amazon Studios for Prime Video, as part of their Amazon Kids streaming service. It aired its first 13 episode season on July 20, 2017. The first part of the second season released on December 28, 2018 and the second part, which is the series finale, released on September 6, 2019.

It is the story of the last human, a boy named Niko, who wants to travel to the center of darkness, which corrupted the world of light and poisoned everything it touched. He is in possession of the Sword of Light, a magical sword which is bestowed with the power of light.

The project was funded on Kickstarter on March 1st, 2013.

The 2017 series provides examples of the following tropes: