Floating in a Bubble 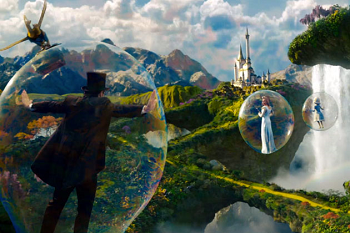 Bubbles—the most fragile, light and transitory of objects. They aimlessly flutter through the air at the whim of a merest breeze, and vanish into nothingness at the merest touch. Hey, let's use them as a form of transportation!

You seem a little apprehensive, so let us clue you in on something: on the inside of a bubble, gravity vanishes. Things just bob around in there, having somehow become as weightless as the bubble itself. Don't worry, it's perfectly safe!

The only tricky part is getting out of the bubble once you get in. For some bizarre reason, people put in bubbles tend to find themselves completely unable to get themselves out, no matter how hard they batter the inside of the bubble. It must be a side effect of zero gravity or something.

Oh? How do we get in? Well, we just get a bubble about ten feet in diameter, and... what? What do you mean, impossible? Well, we suppose we'll just have to shrink down to a few inches and use a normal-sized one, then.

What? How do we steer it? Why, isn't it enough to just go wherever the wind takes you? Is your spirit really tied down to such weighty stones as "appointments" and "street numbers" and "deadlines" and—

Well, if you're gonna be such a spoilsport, just take a taxi.

Bubbles are used to trap enemies for popping and for transport between rounds.

Bubbles are used to trap enemies for popping and for transport between rounds.