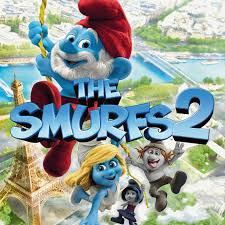 On July 23, 2013, a video game simply called The Smurfs 2, based on The Smurfs 2 developed by Ubisoft and WayForward Technologies, was released for Wii, Xbox 360, Wii U, and PlayStation 3. (The Nintendo DS version is a much different game and will not be included in this discussion.)
Advertisement:

The Smurfs 2 Video Game is an action-packed platform where players assume the role of a CGI Smurf and immerse themselves in an interactive adventure throughout the environment of the Smurfs and all the cut scenes use the animated Smurfs, acting as an interactive storybook.

There being over thirty levels, few set in the cursed forest, New York City and Paris, additional worlds such as The Arctic Tundra and The Lava Jungle exclusive to the game where players explore the enchanting environments, gathering smurfberries, potions, mushrooms and the like.

Along the way, not only do the Smurfs battle creatures under Gargamel’s spell, but Gargamel, Azrael, Vexy and Hackus are also their adversaries.

The game’s playable solo or up to four players, being able to choose between nine Smurfs featured in the film. Speaking of which, each of the nine Smurfs having their own unique ability to use when navigation through the game: