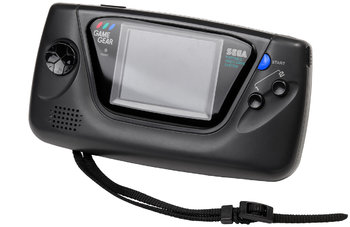 "The full-color portable video game system that separates the men from the boys."
—First commercial

for the Game Gear, 1991
Advertisement:

After achieving success in the US and European markets with the Sega Genesis, Sega decided to expand their Console Wars against Nintendo to the handheld domain. Their answer to the Game Boy was called the Game Gear.

To combat the Game Boy, Sega purposefully designed the Game Gear to address common complaints levied at its competitor. The Game Boy had a dinky dot matrix screen that only worked with four shades of grey, so the Game Gear displayed in color and had a backlight to boot. The Game Boy had an awkward brick-shaped form factor, so the Game Gear was made in a wider landscape format to be more comfortable to hold. The Game Gear is also significantly more powerful than its competition, effectively being a Sega Master System in handheld form. All of this led to a higher, though still somewhat reasonable, price point of US$149.99 (£99.99 in the U.K.). While not the most advanced handheld system of its day, the Game Gear was a very noticeable improvement over the omnipresent Game Boy and had brand recognition to give it an edge over the Atari Lynx and TurboExpress.

The Game Gear released on October 6, 1990 in Japan, with North America and Europe receiving it in April of 1991. It was bundled with Columns, a puzzle game similar to Tetris that was clearly intended to replicate the latter game's explosive success as the console's Killer App. The marketing for the system in America was similar in approach to the Genesis, with Sega playing to the teenage crowd and positioning the Game Gear as the handheld for cool kids. While insulting Nintendo was very much in line for Sega, they went a bit further and insulted their customers to sell the Game Gear; an advertisement famously claimed that Game Boy owners had IQs less than 12.

Despite Sega's best efforts, they were unable to establish themselves as a big competitor in the handheld scene like they had in the home console space, and the Game Gear failed to claim any significant slice of the market. Not that it was a flop, mind you — the system lasted until 1997 and sold 10 million units. That might not be as impressive as the Game Boy's 118 million units, but it was way better than the Lynx's 3 million and the TurboExpress's 1.5 million. Sega's brand recognition at the time is likely the reason the Game Gear ended up a modest hit instead of an outright flop like the other handhelds. It was actually the most successful handheld to go against Nintendo until Sony released the PlayStation Portable in 2004.

The issue is that the Game Gear ultimately fell into the same traps that the other non-Nintendo handhelds had found themselves caught in. The first problem was battery life. Even if the chips didn't consume a lot of power on their own, the screen's backlight did. And you couldn't turn it off or adjust the brightness level to converse power. The Game Gear was infamously a battery hog as a result; it took six AA batteries, and those batteries only lasted a measly 2-5 hours thanks to the inefficient power usage. The original model Game Boy might have lacked a backlight, but it only needed four AA batteries and could potentially last up to 30 hours. The Game Gear's battery issues could be alleviated by a rechargeable battery pack or circumvented entirely by plugging it in with an AC adapter, though these solutions heavily compromised the portability of the system. Not that the portability was amazing in the first place, as the system was larger than the Game Boy and its form factor meant it couldn't be slipped into pockets as easily. Additionally, the first production runs of the system were faulty, and that along with the battery life caused the audience in Japan to largely ignore it. This contributed to the minor support from third parties.

While the Game Gear ended up with over 350 games, its library was dwarfed by the Game Boy's 1,000+ titles. Nintendo still had a stranglehold on third-party developers during the early days of the system, which siphoned pretty much all the support towards them. Sega was able to throw together a decent amount of original first-party games to keep the system alive — including a bevy of Sonic the Hedgehog titles — but the Game Gear ended up heavily reliant on ports from the less-than-popular Master System to bolster its library. Many of the Master System games also ended up suffering from screen crunch due to being straight port jobs that weren't properly adjusted for the smaller screen resolution. Even with Sonic on its side, none of the Game Gear's games lit the world on fire like Tetris did for the Game Boy.

Despite all of its issues, it's not a system to ignore if you have the batteries, a rechargeable battery pack or an umbilical AC adapter (conveniently, it was compatible with Genesis Model 2 AC adapters).

In 2000, third party game developer Majesco, with assistance from Sega, reissued the Game Gear for a reduced price of US$30. Only one new game was released for it (Super Battletank, an unreleased game developed in 1994), just a few existing games were re-issued with it (specifically Sonic the Hedgehog Chaos and Columns) for US$15, and a couple of accessories did not function with the reissue. The battery life was improved somewhat and the new version had a higher quality screen, but it didn't catch on with consumers aside from the retrogaming market. It was gone again by the end of the year. That said, the Nintendo 3DS has some Game Gear games on offer in its Virtual Console, using an emulator programmed by M2, who have a history of making emulators of Sega consoles.

As mentioned earlier, the specs are nearly identical to those of the Sega Master System bar the resolution and increased color palette. This allowed many games from the Game Gear to be easily ported to the Master System and vice versa.