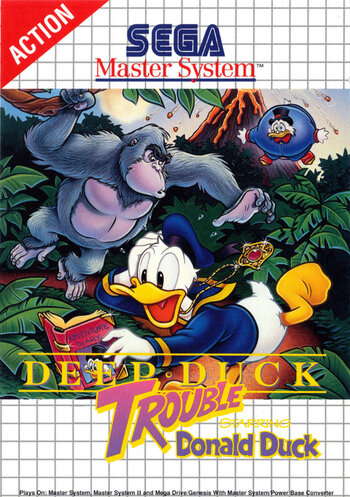 Deep Duck Trouble is the 1993 sequel to The Lucky Dime Caper. This Donald Duck platformer was developed for the Sega Master System by Aspect instead of Sega and features a number of changes from the original game. Instead of fighting with a hammer and a disc, Donald can kick blocks around much like Scrooge in Capcom's DuckTales games, which isn't as useful as holding and throwing blocks like Mickey Mouse but does have its moments of cleverness. There are only 4 levels to be cleared before the final one, but each one is divided in two fairly well-developed and different acts.

The game's story begins with the shocking sight of a balloon Scrooge McDuck, cursed to float in disgrace by a pendant he found during a treasure hunt. It's up to Donald to retrace his uncle's steps on a mysterious island and bring the pendant back to its rightful place so the curse can be lifted.

The game is also available for the Game Gear, but unlike Lucky Dime Caper both versions are the same.

Can't ye see the tropes below are as bloated as a blimp?