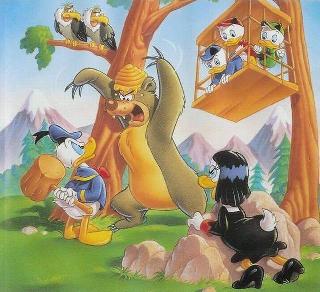 As they developed Quackshot in 1991, Sega realized that simply porting the game to the Sega Master System, even with heavy changes, would not do justice to Donald Duck. And so the similar yet different The Lucky Dime Caper was created.

The game begins as Scrooge McDuck gives a dime to each of his nephews not named Donald. He once again talks about how his Number One Dime triggered his quest for fortune and explains that they too could become rich if they worked hard for it. Then Huey, Dewey and Louie are suddenly kidnapped and Scrooge gets a dive kick from Magica De Spell, who takes his dime away. Donald is sent on a mission to save his nephews and recover the four dimes.

This platformer has 7 levels and is divided in three parts: the search for the nephews, their dimes and the #1 Dime. Much like in its Sega Genesis counterpart, the player can enter the available levels in any order. Donald is armed with a hammer for close combat, which he'll lose if he gets hurt. The hammer can be recovered or exchanged for a disc by collecting items from defeated enemies.

The Game Gear version has different level designs and some minor gameplay changes. In 1993, Deep Duck Trouble was released as a sequel. Also worth noting is that two decades later, after a long drought of Donald games, he brought the hammer back for his playable appearance in Disney Infinity!

Tropes whacked by Donald's hammer into the horizon include: