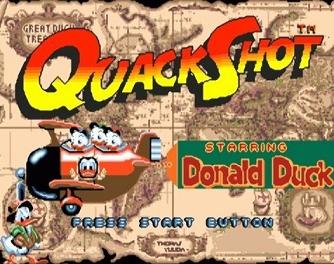 Quackshot: Starring Donald Duck is a platformer developed by Sega in 1991. It stars the titular Donald and his young nephews Huey, Dewey and Louie on an Indiana Jones-style hunt for treasure.

Whilst in his Uncle Scrooge's library, Donald stumbles on a treasure map belonging to King Garuzia, the ancient ruler of the Great Duck Kingdom. Believing this will make him rich beyond his wildest dreams, he sets off treasure hunting with his nephews. Unknown to him however, Pete learns of his plans and sets about following his every move in hopes of stealing his riches.

Aside from the game's enjoyable platforming, the player could take on each available level in whatever order they saw fit. However, the end of each level leads to a "dungeon" entrance that could only be accessed with the right item or weapon. As Donald, the player could call in his nephews' plane to whisk him off at this point and return to the entrance when he located the required items in other levels. Essentially, most levels could be beaten in any order but the "dungeons" and final levels had to be beaten in a specific order to progress.