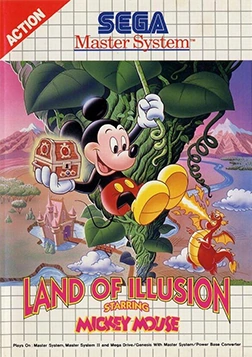 The Land of Illusion awaits.
Advertisement:

Land of Illusion Starring Mickey Mouse is the 1992 Sega Master System and Game Gear sequel to Castle of Illusion.

After falling asleep as he read a fairy tale book, Mickey finds himself on the world from its stories. A villager tells him about how their lands are being menaced by an evil sorcerer called Phantom who has already transformed several people into dangerous beasts and imprisoned their princess. Mickey then sets out to defeat the villain and figure out how to return home.

The game improves on the platforming, butt-stomping and block-throwing action from the previous game with some new abilities that Mickey can use to revisit previous levels and find alternate paths that lead further into the world. The level design also gives a harder feel with some focus on puzzles.

This game features the illusion of the following tropes: