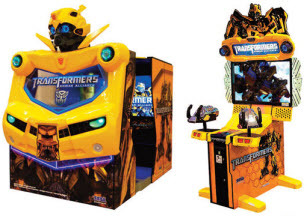 Transformers: Human Alliance is a 2013 arcade from Sega, co-produced by Hasbro. It's based on the film franchise as it uses its character designs.

In the game, you play two new character unrelated to the movies, Jay, a friend of Sam Witwicky, who unwittingly gets caught in the mess and Vanessa, an agent of NEST, as they help the Autobots combat the Decepticons and try to prevent them from taking over the Earth.

The game has you traveling with an Autobot as you shoot down enemy bot chasing you. As with previous title Let's Go Jungle!, there are sections that prompt you to hit buttons at certain times or turn the gun to avoid attacks. Every so often the Autobot your with will engage in combat against a Decepticon and you must help them out by shooting the Decepticon enough that the Autobot can gain the upper hand. How well you do contributes to your ranking at the end of the fight.

The game can be found in the usual '42 version or the '55 theater version. Here's a playthrough of the game.