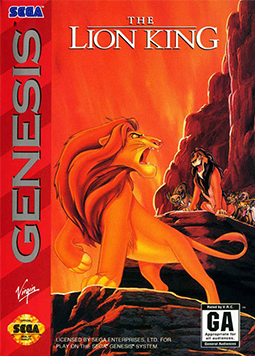 A Platform Game based on Disney's The Lion King, developed by Westwood Studios and released by Virgin Interactive in 1994. The game has ten levels loosely following the plot (and the soundtrack) of the movie, the first six with Simba as a cub and the other four with the adult Simba.
Advertisement:

The game appeared on a variety of platforms, including both the Sega Genesis and the Super Nintendo Entertainment System; unlike with Aladdin, the two rival 16-bit consoles got what was essentially the same game, and telling which version was better could be

. Other versions tended to leave stages out. Interestingly enough, this game received a PAL-exclusive port for the Nintendo Entertainment System of all platforms in 1995, with this port being the final game officially licensed and released for the system.

On October 29, 2019, Nighthawk Interactive and Digital Eclipse re-released the SNES, Genesis, and Game Boy versions of the game alongside Aladdin (the Genesis, Game Boy, and Super Game Boy versions) as part of an HD compilation called Disney Classic Games: Aladdin and the Lion King for Microsoft Windows (via Steam), PlayStation 4, Xbox One, and Nintendo Switch. Notably, this was released the same year as two widely successful live-action remakes of both films. Later, on September 23, 2021, Nighthawk Interactive announced that they would be releasing another compilation called Disney Classic Games Collection: Aladdin, The Lion King, and The Jungle Book, which includes all the aforementioned games, as well as Aladdin (the SNES Version), and both the SNES and Sega Genesis versions of the The Jungle Book video game. (The initial compilation release will also have DLC adding The Jungle Book and Capcom's Aladdin.) This compilation was released on the PS4, Xbox One, Switch, and Windows on November 23, 2021.

Tropes occurring in the game: