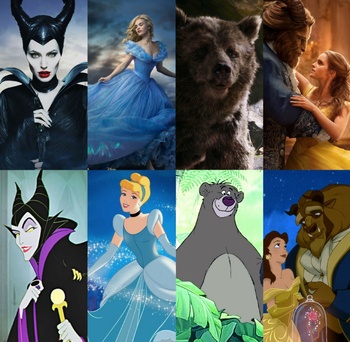 "From the studio that brought you Beauty and the Beast, Aladdin, and The Lion King... Twice."
— Trailer for Free Guy
Advertisement:

Since The New '10s, Walt Disney Pictures has been making Live-Action Adaptations, remakes, reimaginings, etc. akin to or directly based on films in the Disney Animated Canon. While they're not the first live-action adaptations Disney has made, the current crop can be credited to the success of two films which were conceived around the same time: Alice in Wonderland (2010) and perhaps more importantly, Maleficent (2014).

Unlike the later films, Alice in Wonderland was not a remake of their classic animated film of the same name but rather a sequel with a grown-up Alice, inspired by the book just like the animated film was, and filtered through the mind of Tim Burton. It was one of the biggest hits of the year.

In contrast, Maleficent was a live-action reimagining directly based on their classic animated film Sleeping Beauty. It was a Perspective Flip Alternate Universe take on the story. Maleficent isn't the evil fairy witch she is in the original, as instead she is a troubled, introverted fairy who was spurned into hating humans by a bad experience one year before Princess Aurora is born. Aurora, whose rather Flat Character was replaced with something more in-depth, grew up believing Maleficent was her Fairy Godmother, as much as Maleficent tried to become her enemy. The film's interesting new take on Sleeping Beauty's characters ended in it becoming, like Alice, one of the biggest hits of the year.

With these successes, it was unsurprising that Disney tried doing a Live-Action Adaptation again. Cinderella (2015) is a remake of Cinderella. Unlike Maleficent, it stays true-to-the-text for the most part and is still from the POV of Cinderella. However, the Cinderella remake adds new details and character elements to the story. It also used a few long-held fan ideas, such as how "Cinderella" is a nickname for "Ella" (or "Elizabeth"/Elisabeth/etc). The remake ended up selling well, and as a result Disney decided to create more remakes of various animated films of theirs.

Most of the films are Self-Adaptation reimaginings of the Disney Animated Canon originals. They might take inspiration from other adaptations, the original source, or even fan-ideas (for example, "Adam"note This comes from the 1998 video game called The D Show. as the Beast's name was rarely officially used until the remake of Beauty and the Beast), however they overall take note from the original Disney animated films. Some elements that were scrapped in the original films development are known to be in the remakes. The remakes are not, however, shot-for-shot remakes of the original films. They are more historically accurate than the originals (at least in terms of sets and costumes), which means slight differences in designs and other elements, and feature personality changes, name changes, Adaptation Expansion, and even completely new characters.

The Lion King (2019) is technically not a live-action remake due to the absence of onscreen humans like the original, but still has everything else in common with the current line, hence its inclusion in it. Christopher Robin is also technically not a remake, rather a sequel to The Many Adventures of Winnie the Pooh, but it is a live-action film with CGI based on an earlier Disney animation property nonetheless.

There were a few early films that prefigured the later trend of live-action remakes, but they are not part of the current series listed below.

Tropes common to these films: