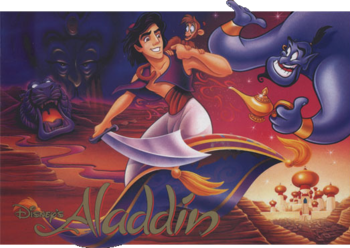 A Platform Game based on Disney's Aladdin, released by Capcom in 1993.

This Aladdin game, in which Aladdin uses a bedsheet as a parachute, was initially an exclusive for the Super Nintendo Entertainment System, though there were bootleg versions for the Nintendo Entertainment System and Sega Genesis (for which Virgin Games' Aladdin was legitimately released), and it was ported to the Game Boy Advance eleven years later.

On September 23, 2021, Nighthawk Interactive announced that this game would be included in a compilation called Disney Classic Games Collection: Aladdin, The Lion King, and The Jungle Book, along with the Genesis version made by Virgin Games, as well as both the SNES and Genesis versions of the The Jungle Book and The Lion King video games. It was also added as DLC to the initial Disney Classic Games: Aladdin and The Lion King release from 2019 that featured only The Lion King and Virgin's Aladdin. This compilation was released on the PlayStation 4, Xbox One, Nintendo Switch, and Microsoft Windows (via Steam) on November 23, 2021.