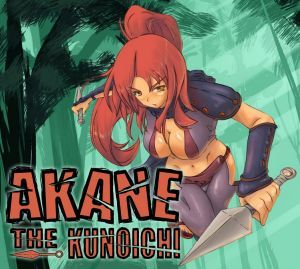 Akane the Kunoichi is a retro-styled Platform Game.
Advertisement:

The title character, Akane, is a kunoichi who serves (and is in love with) the samurai Goro. When he gets kidnapped by the evil Hiromi, Akane sets off to rescue him. The game features fifteen levels, divided into five acts (with the third level of each act featuring a boss fight).

The game was developed by Haruneko (the company of Italian indie developer Giovanni Simotti). It was released in 2011 for Xbox 360 (being part of the Xbox Live Indie Games program). It was later ported to Windows (releasing on Steam and Desura) and iOS. Haruneko later released Amazing Princess Sarah, a sort of Spiritual Successor.

On May 9, 2014, the game received Steam Trading Card support. There are seven cards in total, and you'll revive four cards at random for purchasing and playing the game.