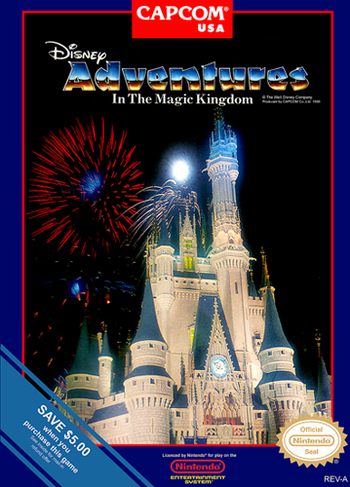 Back in the late 80s and early 90s, when Capcom was making numerous video games based on Disney franchises such as TV cartoons DuckTales (1987) and Chip 'n Dale: Rescue Rangers, and the movie The Little Mermaid, they decided to try their hand at a game based on Disneyland itself.
Advertisement:

Made in 1990, Adventures in the Magic Kingdom can be seen as an early precursor to Kingdom Hearts, or more accurately, Kinect: Disneyland Adventures. You play the role of a boy whose name you determine, who explores the place and goes on rides that are essentially minigames, in an attempt to collect 6 keys to open the gate needed to start the Disneyland parade. You also meet a small handful of Disney characters.

The rides included as minigames are:

The first two of those rides play out as platformers, with slightly different rules - in Pirates of the Caribbean, you start out unarmed and must avoid enemies until you collect a candle, which you can then use infinite times, as you try to rescue all 6 hostages. In The Haunted Mansion, you have a limited supply of candles to use to fight ghosts, and your only goal is to reach the end. The other three games are straight-up minigame in their style.

The game also allowed you to collect stars, which could be used on a pause screen to buy life, lives, brief invincibility, or freeze time. What you couldn't do, was extend or freeze your (only visible on the pause screen) time limit.

The music in the game is from Yoko Shimomura, who would return to Disney 12 years later as the composer for Kingdom Hearts. The platform game concept of a player exploring a Disney Theme park would re-surface in Mickey No Tokyo Disneyland Daibouken released later for the Super Nintendo.