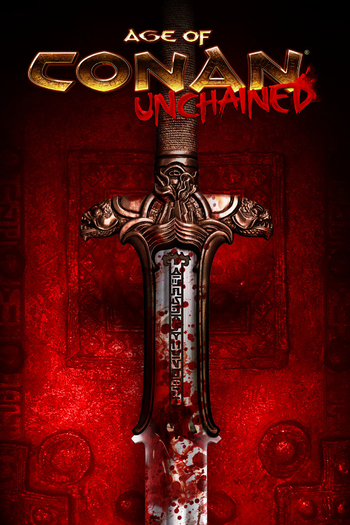 Age of Conan: Hyborian Adventures is a Massively Multiplayer Online Role-Playing Game set in the universe of Conan the Barbarian, originally created by Robert E. Howard; and developed by Funcom. It was originally released in 2008. As of July 2011, it has moved away from the original subscription-only model to a hybrid "Freemium" model, with a combination of free and paid content.
Advertisement:

The world is remarkably faithful to Howard's original stories; with notable influences from both film versions (the original by John Milius starring Arnold Schwarzenegger, and the 2011 remake by Marcus Nispel starring Jason Momoa). Unsurprisingly, it partakes of many of the tropes present in its source material; as well as many specific to MMORPGs. Nearly all of the background music in the game is inspired by, or taken directly from, the soundtrack of the first movie.

The original release of the game met with considerable critical and public reaction, both positive and negative, for being more frankly and explicitly violent and sexual than was typical for MMORPGs up to that point. It was notable for being the first MMO to deliberately aim for a "Mature" rating; which was played up strongly in the advertising and promotion for the game. The "mature" aspect was similarly played up as part of the conversion to a "Freemium" hybrid model; with the original name for the update billed as Age of Conan: Unrated. The "Unrated" was changed to "Unchained" by release time.

One of the earliest criticisms of the game was the lack of story or character-development driven content available for mid-level players; with most quests consisting of extended grinding sessions. The game developers explained that they had not expected players to advance so quickly; and had delayed development of content beyond the beginner areas. However, from other sources, it seems equally likely that Funcom wanted to delay development until they were able to gauge the player reaction and membership numbers. Subsequent expansions have released a considerable amount of mid-level and high-level content; but the drop off in subscriber numbers after the initial release is thought to be a large part of the impetus for the move to a free/paid hybrid model.