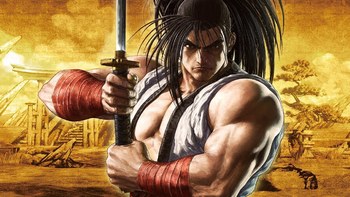 Embrace death, and no one can stop you.
The way of the Samurai is to know death.
The way of Shura is to know victory.
I am the ultimate fighter, and all those who stand in my way shall...

Known as Samurai Spirits in Japan, this SNK one-on-one Fighting Game series is set during the closing years of the Edo period. The first game, Samurai Shodown, was the debut of the Weapon Fighter subgenre, and the one of the first fighting games to introduce a super meter, the Rage Gauge. Once filled, this gauge increases the strength of attacks; starting with the second game, Samurai Shodown 2, each character also has a super move that empties the gauge after successfully connecting. Samurai Shodown 2 is also credited with introducing the first "parry" system.

Overall compared to its numerous fighting game brethren, Samurai Shodown stood out from the crowd namely by being more about finesse and less about chaining super combos. Specifically, thanks to the high damage output of singular moves, the battles here would run either incredibly quick or maddeningly slow. It leads to a more chess-like experience with a focus on hit-an-run tactics that makes play quite unlike most other 2-D fighters. However, for this very reason, its remained mostly in the cult favorite realm as high-speed super-combo-chaining fighters have taken nearly complete prominence. Also, on a lesser note, it's rather bloody to say the least...it may not have focused on the gore aspect like Mortal Kombat, but it can fill almost as many buckets.

Ports of most games existed — including two for the Neo-Geo Pocket — but were not numerous. A few Spin Offs were made, like Shinsetsu Samurai Spirits: Bushido Retsuden, (aka Samurai Shodown RPG) for the Neo-Geo CD, Nakoruru: Ano Hito kara no Okurimono for the PC and Dreamcast, as well as a pachislot game. A few characters have appeared in crossover games like the SNK vs. Capcom series, and the third Days of Memories game features only Samurai Shodown characters.

While perhaps not entirely historically authentic — the period between Sengoku and Bakumatsu was awfully short on fire-breathing kabuki actors, green cavemen, and clockwork robot onmyoji, and none of the Tokugawas was a Handsome Lech who wielded eight swords at once — the game is notable for its atmosphere, which enthusiastically recalls the Edo period's music, style of dress, etc.

Incidentally, the title is deliberately misspelled, a sort of portmanteau of "showdown" and "shodo" (calligraphy). That doesn't mean that the games' English translations aren't full of accidental misspellings and "Blind Idiot" Translation, though...

It is in its own way, a sort of spiritual predecessor and inspiration for the current dominant weapons fighter - Soulcalibur. It even gets some small nods in various outfits for the characters that echo those found in Samurai Shodown. The circle was completed when Haohmaru was announced as a DLC character for the Soul Calibur VI Season 2 pass.

The franchise went onto a hiatus after Edge of Destiny, seeing that the game was very much reviled, relegating Samurai Shodown into either mobile/pachislot titles. SNK didn't give up on the franchise, however. They expressed the desire to bring the franchise back from the grave and made steps for it when they came back to the mainline gaming scene, by including the franchise heroine and company co-mascot Nakoruru into The King of Fighters XIV and SNK Heroines: Tag Team Frenzy, this way, it brought back the attention of the mainstream to the series.

And bring the franchise back they did with a new game simply titled Samurai Shodown again, a 2.5D game running on Unreal Engine 4 which harkens back to the classic gameplay. Released for PlayStation 4, Xbox One, Nintendo Switch and PC in 2019, it took the Fighting Game Community by storm and it quickly earned a spot in Evolution Championship Series 2019, thus completing the resurgence of SNK. The launch was also accompanied by a quartet of special edition Neo Geo Minis, each themed around a character of the franchise (Kuroko, Ukyo Tachibana, Nakoruru and Haohmaru).

The debut trailer can be seen here

, this is the trailer they prepared for PAX East 2019

and here's the official gameplay trailer.