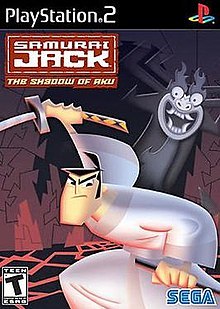 Live the legend of Samurai Jack
"Born and bred a warrior, Samurai Jack is thrust into the future by his nemesis Aku. In his travels, Jack learns of a time portal that can reunite him with his ancient ancestors. Now he must battle Aku's minions across burning villages, massive forests, and the bustling Aku City to find the portal!"
— Back of the case
Advertisement:

Samurai Jack: The Shadow of Aku is the second video game based on Cartoon Network's Samurai Jack. It was made for the PlayStation 2 and Nintendo Gamecube in 2004.

Tropes back, back in this game include: