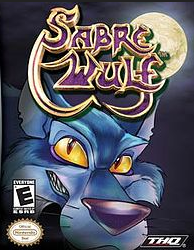 Sabre Wulf is the first game in the Sabre Man series (followed by Underwurlde, Knight Lore and Pentagram), and the game which introduced Rare Ltd's long-running Sabreman character (who's since appeared in many other Rare games). The game was published in 1984 by "Ultimate Play The Game" a.k.a. "Ashby Computers and Graphics", both of which ultimately proved to be trading styles of Rare. If the title character sounds familiar, you might have played another Rare-created series that featured a similar creature.
Advertisement:

There exists two different games carrying the same name: the 1984 original, a ZX Spectrum Action-Adventure starring Sabreman, a British explorer who finds himself trapped in a deep labyrinth-esque jungle chasm and now must find his way out of it by finding 4 pieces of an amulet. However, on his path he'll have to fence against jungle creeps of various sizes, natives and the titular Sabre Wulf, an implacable wolf who appears at times and is better dealt with by running away. Besides the amulet pieces, Sabreman can also collect different treasures for points and colored flowers that grant him temporary special abilities (increased speed, invincibility) or disadvantages (inverted controls). The game got ported to a few other computers of the time, like the Commodore 64 and Amstrad CPC. This game, along with two of its sequels, was rereleased in 2015 on Rare Replay

The second game was released in 2004 for the Game Boy Advance, and works as a sequel to the first: Sabreman ended up banishing the evil Wulf as he was ravaging a nearby town, using the magical amulet. The townspeople then erected a statue of the wolf, and used the amulet to seal him inside it. Things went smoothly for a while, until Mad Scientist Dr. Dolittle-Goode came into the picture. Having tried to seize the land for years, he finds out about the Wulf and releases him, breaking the amulet into eight parts. Now both join forces to terrorize, conquer the lands and steal anything they want from various bystanders. Desperate, the Mayor of Blackwyche Village seeks out Sabreman to deal with the evil duo.

This Sabre Wulf is a more straightforward Puzzle Platformer, as Sabreman now has a host of small Monster Allies which assists him with their different abilities (jump higher, create platforms, move obstacles, etc). Besides the amulet parts, Sabreman gets involved in several Fetch Quests trying to recover the objects (or people) Wulf has stolen. Once said article is found, the Wulf wakes up and the player must run away back to the entrance before the wolf can catch him.

The GBA version (2004) provides examples of: