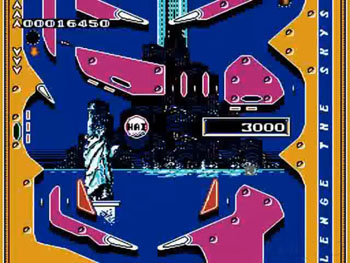 Roller Ball is a Digital Pinball Table created by HAL Laboratory, Inc. It was released in 1984 for the MSX, then subsequently ported to the Nintendo Entertainment System in 1988.

As with many other pinball video games of the time, there is no theme or objective beyond achieving a high score. The playfield is several screens tall, with Flip-Screen Scrolling to follow the ball when it goes off a screen. The NES version also features "Match Game", a simultaneous two-player competitive mode played on a single playfield with two sets of flippers.

The game is notable for its smooth action and (reasonably) realistic ball physics, giving it an authenticity that eluded other pinball video games of the time.