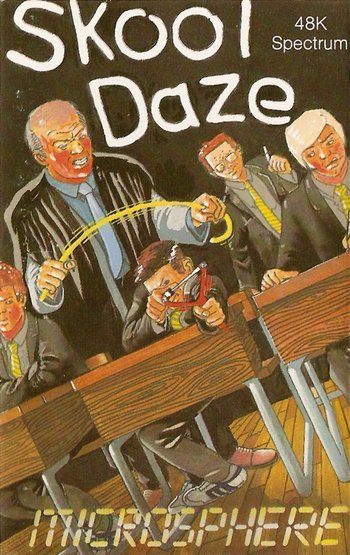 Skool Daze is a 1984 computer game released by Microsphere for the ZX Spectrum and Commodore 64. The game places you in control of Eric, a schoolboy who must steal his report card from the school safe to prevent his expulsion. He must also avoid getting into trouble with the staff, as well as avoiding the fist of the school bully Angelface, the catapult of the tearaway Boy Wander, and getting tattled on by the Insufferable Genius Einstein (no, not that one). Get caught in your misdeeds and you'll be given lines as punishment; rack up 10,000 lines, and it's game over.
Advertisement:

With a distinctly British sensibility, an anarchic sense of humour, and the freedom to ignore the main quest and just mess around, Skool Daze is fondly remembered mostly by British gamers of a certain age.

A sequel, Back To Skool, was released the following year. A Fan Remake named Klass of '99 was released for PC in, as you might expect, 1999, with a Game Boy Advance homebrew port released a few years later. Bully owes it quite a debt.