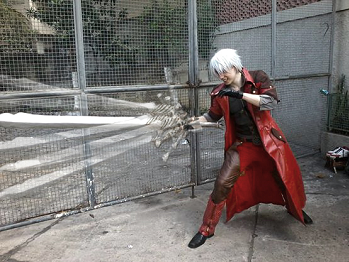 BREAKDOWN!
"'Repeatedly strike within a single breath?' That is not what that was; they were at exactly the same time. In that instant, three swords existed."
— Saber, Fate/stay night [Unlimited Blade Works]
Advertisement:

A character attacks with a rapid series of slashes or stabs, either with a bladed weapon or with natural claws. Taking the speed part Up to Eleven and into outright Super Speed territory results in the following two subtypes:

Blade Spam is oftentimes the mark of Master Swordsman-type characters (or the equivalent for other kinds of weapon-users) in many works, and usually take the form of striking a given target from several different angles/directions—typically the eight cardinal and ordinal ones—within the span of a second.

Sub-Trope of Spam Attack. More Dakka is the Gun Counterpart, while Beam Spam is the laser/magic counterpart, although there may be overlap if combined with a Sword Beam. Compare Storm of Blades, for when several blades are rapidly thrown at the target. If someone does this unarmed, that's Rapid-Fire Fisticuffs.

After filling their Link Meter, a dual-blades-wielding villager such as Scarlett can team up with Alice or Ares to tear the enemy apart with a thousand slices.

After filling their Link Meter, a dual-blades-wielding villager such as Scarlett can team up with Alice or Ares to tear the enemy apart with a thousand slices.