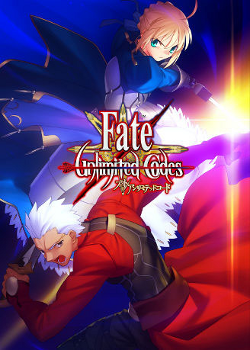 Fate/unlimited codes is a Fighting Game spinoff of the Fate/stay night series, first released for Japanese arcades in June of 2008, followed by an Updated Re-release on the PlayStation 2 in December of the same year, and then ported to the PSP in June of 2009. The PSP version made it to North America and Europe as a downloadable title later that year.

The game takes place during the Fifth Holy Grail War from the perspective of several characters, including Shirou Emiya and Saber. Cameo appearances consist of Bazett Fraga Mcremitz, Saber Alter, Leysritt and the Lancer from the Fourth Holy Grail War.

On June 12, 2012, the game was removed from the PSN store due to an expiring digital license. In the two weeks leading up this, the game was available at a discount of half its usual price.