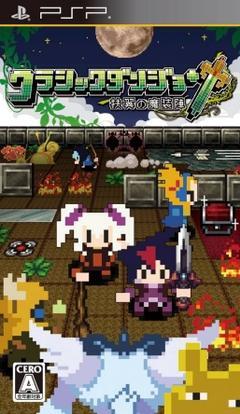 Arcanus Cella is a world of mystery, existing in a universe parallel to our own. Is rumored to be a land full of great treasures, powerful monsters, and wishes granted beyond one's wildest dreams.

Two young would-be heroes, Pudding and her childhood friend Souma, stumble upon this mystical place when exploring a mansion one night. Landing in an idyllic village with none to disturb them except for the sorceress Despina, they desperately search to find a way out of Arcanus Cella and back to their homeworld. Could it be through the unassuming tree in the southeast corner? Or past the creepy-looking door on the north side of town? And why are all of these other strangers gathering in this place all of a sudden?

Such is the tale behind ClaDunnote portmanteau of "classic dungeon": This is an RPG!, a downloadable dungeon-crawling Action RPG released for the PSP in 2010 by Nippon Ichi. The goal of the game is to fight your way through the dungeons, avoiding traps and defeating enemies in search of the exit. You control a single character, but through the use of the game's "Magic Circle" system, other characters can join you to protect you from harm, while also giving you a boost in strength.

A sequel, ClaDun X2, was released late August 2011 in the U.S., taking the editing up to eleven with editable weapons, armor, animations, and even background music. The sequel also introduced new characters and new classes, such as a long range archer class. Now on Steam

A third entry, titled ClaDun Returns: This is Sengoku!, was released for the PlayStation 4, Play Station Vita and Steam on May 27, 2016 in Japan and June 6th, 2017 worldwide. Set during the Sengoku era of Japanese history, Sengoku has players traversing the danger-filled dungeons of feudal-era Arcanus Cella to save lost souls who have yet to reincarnate into the real world. In addition to all of the features introduced in x2, Sengoku adds new classes, the Shuriken and Sickle weapon types, a new Ran-geon type, and multiplayer features.

The same teams would go on to release a Spiritual Successor in the Play Station Network-exclusive Legasista in 2012.