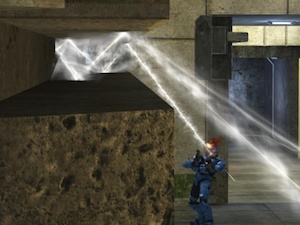 Simple geometry.
"It bounces? Who designs a gun that bounces?!"
— Agent Washington, Red vs. Blue
Advertisement:

A variant of Bizarre and Improbable Ballistics, where a bullet, arrow, stone, whatever, ricochets off several objects before finally hitting its target. Can be either accidental or just a sign of the shooter's skill. A sister-trope, Hyper-Destructive Bouncing Ball, describes instances when an item ricochets, causing random damage. That is not this trope; this always has a definite target, even if the shot hits the target as a result of pure luck.

To pull this off intentionally means you're either The Gunslinger or an exceptional (and highly unrealistic) Master Archer; pulling it off accidentally makes you incredibly lucky. This is often a characteristic of the Precision-Guided Boomerang, though returning to the wielder is not necessary. You may find one in a Trick Shot Puzzle.

Technically Truth in Television, but with a huge asterisk — see real-life examples. Most treatments in fiction are Artistic License – Physics at its finest, the biggest issues being the number of ricochettes, and the ability to control the angle of deflection.

Compare Reflecting Laser. Also see Bouncing Battler, where a character uses this as a fighting technique.

Now that the physics majors are (hopefully) appeased:

The Curling Bomb slides along the ground much like a curling stone, ricocheting off of walls and obstacles as it goes.

The Curling Bomb slides along the ground much like a curling stone, ricocheting off of walls and obstacles as it goes.