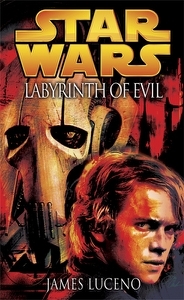 A Star Wars Legends novel by James Luceno, Labyrinth of Evil is the story of how the Jedi almost caught Darth Sidious in the months leading up to Revenge of the Sith.

Despite failing to capture Nute Gunray on Cato Neimoidia, Obi-Wan and Anakin manage to recover crucial intelligence that may lead the Republic forces to their ever-elusive ultimate quarry: Darth Sidious. Following the trail across the galaxy, the two Jedi never quite manage to catch up with the elusive Sith, but get a glimpse of just how extensive his machinations are before being recalled to Coruscant in order to rescue Palpatine from Grievous.

The book covers roughly the last few months before Episode III, and retells the story of the invasion of Coruscant, as featured in Star Wars: Clone Wars, while providing a completely different explanation than that miniseries of what Obi-Wan and Anakin were doing just before being recalled to Coruscant.

Labyrinth of Evil, along with the Revenge of the Sith novelization and Dark Lord—The Rise of Darth Vader, is part of what is unofficially called the "Dark Lord" trilogy.

Labyrinth of Evil provides examples of the following tropes: